Frank Darabont's third Stephen King adaptation brings to the screen something truly unsettling - being stuck at the local store during the busy hours. Though I guess there are a few other horror elements involved. Part siege movie, part monster mash; it handles some great set pieces and a few fun characters even if there is more splatter than atmosphere in places, and not all the effects are totally convincing to say the least. It's solid entertainment although it's never really that harrowing, but at least it's fun to see how things unfold as it mixes predictable tropes with unexpected jolts of imagination. 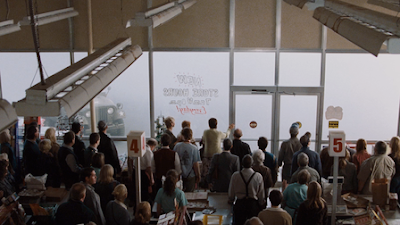 The best parts are those moments when the indescribable things sat hiding in wait finally reveal their tendrils. There's a great variety of critters involved and each of them gets a memorable moment on screen. The biggest surprises come from what is going to come next and it generates a real feeling of unease when they are never the same twice. Of course the nature of this plot means that the worst monsters are not outside in the mist but some of the people hiding in the grocery store. I guess we can call this trope Law of the Flies.

Elsewhere Tom Jane's every-man hero might not be the most engaging character, but his co-stars bring a good level of personality to the proceedings without being given that much screen time. There are a many familiar faces trapped together and in a way they merge into the general 'character' of the film as an ensemble. Toby Jones is also on hand to do another great accent which is always nice. They even manage to dodge the deadly poison of a forced romance and teenage melodrama subplots, although a brief scene almost goes there.

The real issue is that it's far too heavy handed in a few moments that should have been more subtle. It's clear from the outset that sooner or later the survivors are going to start facing off against one another but it's very blunt and almost cartoon like in a few key scenes. That's not necessarily a bad thing but if that was the tone they were going for it might have been a good idea to focus on this from the start. The darker and more serious scenes suffer as a result of sudden over-acting. Some of the musical choices that I guess are meant to feel emotional in the third act are really odd too, and at times sound like they are from the wrong film.

Overall though this is a nice genre throwback from a period littered with useless footage movies. I believe an adaptation of the original short story was planned in the 1980s so it's good some of that vibe stuck. There is even a black and white version available so there is also a good amount rewatch value here. The ending might go a bit far but at least it's not predictable, and in a story full of typical Stephen King stock characters that's saying something. It's not the most consistent film in terms of style or performances but it's never dull.

The whole zombie thing is something I rarely keep up with. It's always shambling along in some form but I was never a big fan of this genre being taken seriously. A perfect example of this is Braindead, (aka Dead Alive) a film as ludicrous as the premise of walking corpses. That's not so say I don't appreciate the creepy classics, after all George Romero was at least at one time king of the zombies. But here we're back to the hyperactive infectees from 28 Days Later. Unfortunately this is a bloodless affair, without either the drool spewing craziness of Danny Boyle's infected or anything that resembles the madness of the best Tom Savini effects. Does it end up being an effective thriller in it's own right? Not well enough to cover the other problems. 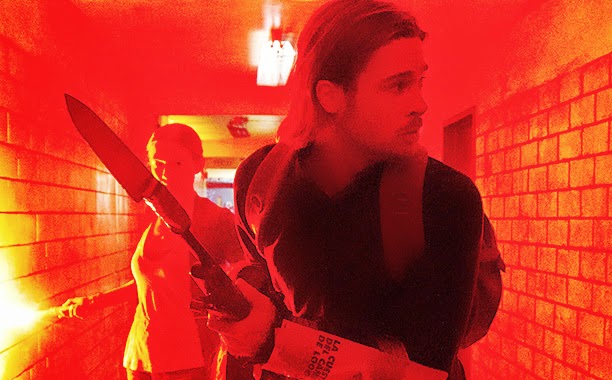 My expectations were low having heard the stories of studio interference, rewrites and worst of all - the reliance on CGI. So surprisingly it starts well with early sequences that mix chase scenes with slow tension building. Little touches like DIY survival gear are used subtly and the photography looks good. Brad Pitt isn't exceptional but does a reasonable job and the rest of the cast does their best, so despite the lack of explicit horror I was engaged at first. It doesn't last though as it becomes apparent they have written a story reliant almost entirely on random convenience rather than logic.

While the set pieces are rather good in at times, the globe spanning events of the story seem to service the spectacle instead of the plot. Things never feel like they're falling into place naturally which quickly becomes frustrating. Our protagonist Gerry just happens to be the only man for the job, he just happens to come across the right clues required to solve the problem, and when things get messy during the third act he naturally finds himself exactly on the right path. Some of the story developments don't even make that much sense later on so any tension evaporates. After a while I started wishing for less script and more flesh tearing.

It's not all bad and all that development trouble could have resulted in a film of far worse quality... but in the end it failed to make me care about what was happening. After a while it was clear that nothing that nerve wracking was going to go down. All the running and climbing the zombies do isn't as awful as I had expected it to be, but they never feel like a real threat. Everything is so neatly averted despite one or two interesting setups along the way. They should have worked on making the film engaging instead of clunky. Instead they seem to have focused on simply distracting the audience with one location after another so they don't pay attention to the writing.