It's been a long time since it was released and the sequel has now of course come and gone. Which is better? It's debatable. But I wanted to take a fresh look at what was touted by some as the 'best action movie of the last ten years' on its release, having never given it a proper write up. While this hyperbolic quote remains a little absurd and there have been many great examples of martial arts cinema in this time period from the likes of Tony Jaa and Donnie Yen, it does sum up the kind of impact it might have had on general audiences. Many films like Warrior King (aka The Protector) and Ip Man had been released before this so a new addition in the genre was never going to blow me away, but it has to be said this is a solid piece of work that should sate all but the most sadistic action fans. 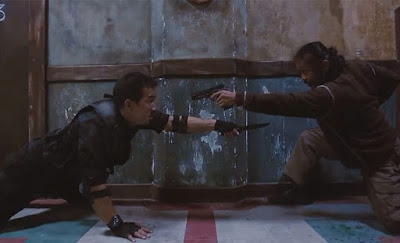 Looking back I wondered where that dumb 'Redemption' part of the film's title went. Did it get dropped or was it a regional thing? Looking back it's also still clear that no matter what the name is Gareth Evan's ultra no frills drug bust movie is still a dirty, bloody, brutal affair. It's generally a far nastier experience than you'd normally expect in this kind of picture. In sharp contrast to the dance like movements of a typical fight sequence there's an excess of stabbing, gouging and point blank shooting to the head. You can really feel all the splinters and shrapnel. In some ways a film about criminal violence should not hold back so that the results can be seen. Censoring everything detracts from the reality of how unpleasant things can be.

There's something nightmarish about the whole scenario which melds the action experience with a grimy underworld story. It's worlds away from something more mainstream like Captain America: The Winter Soldier. Steve Rogers never brutally murders anyone with pieces of glass or slams them into broken wood just to survive. This isn't in the same genre, or even in the same dimension. I find it hard to believe anyone in Hollywood is still considering a remake of this, I don't think they have the stomach for it. At the of writing it hasn't appeared; imagine my lack of surprise. But this was a film directed by a Western film maker which at the time had me expecting fights obscuring by shaking cameras and nonsensical cuts.

But there is no such lack of clarity and certainly no restrain as backs break, blood spurts and sharp objects go through their victims to scrape against nearby surfaces. It's an all round eye watering experience to say the least. This kind of violent mayhem contributes to the strange horror atmosphere the film has. Along with the decaying urban setting and a number of moments where the central police unit becomes trapped without weapons in the dark and dirty corridors there's a constant level of tension. It's generally bleak and uncomfortable to watch during most of the film. Some moments even have a low budget John Carpenter vibe in places, almost like Assault on Precinct 13 but with the siege indoors. 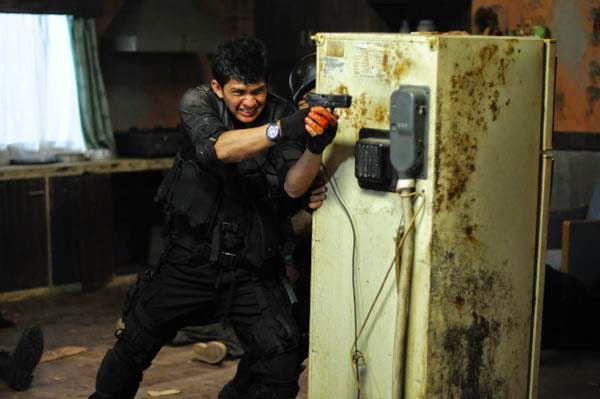 Everyone looks so unhealthy with the faces of both the cops and the unwashed thugs hunting them becoming incredibly pallid and sweaty. The colour grading of the film itself adds to this sickly tone thanks to a heavily desaturated look to everything. It's a grimy film to say the least. But it does have some moments of respite along the way that lend it some heart. This isn't a completely unrelenting experience and it's worth mentioning that amongst all this grit the score by Mike Shinoda of and Joseph Trapanese is surprisingly pleasant in a number of quieter moments. Of course the music is also used to amplify the parts where the rhythm picks up to match the adrenaline of the choreography.

It's a straightforward almost bare-bones plot as involving a squad of police officers raiding a tenement block. The have to go in and capture a drug lord who's keeping himself holed up on the top floor, which of course is more complicated for them than it first appears. The main hero Rama (Iko Uwais) adds a few more wrinkles to the situation since he's got a pregnant wife waiting at home and a long lost brother somewhere in the building. Other characters like team leader Jaka (Joe Taslim) and evil henchman Mad Dog (Yayan Ruhian) are all stock archetypes but they add some charisma to the proceedings. But the simplicity is part of the charm and this stripped down storyline is welcome when thrillers can often become meandering or convoluted.

There are twists and turns along the way, but it's never contrived. The only real problem with this formula is that it probably peaks too early. The initial raid itself is so explosive thanks to a shoot out and a kitchen siege that it takes time for the later scenes to regain any momentum. There's also a night-stick versus knives fight in the first half that was probably the most memorable hand to hand set piece. It's an almost exhausting experience by the end that the final showdown feels a little too small in scale. But these are minor issues. It might not have any serious character depth and the bits of development that do take place are clichéd, but it's at least it doesn't hold back where it matters. Despite holding no major surprises for genre fans it delivers where it counts which is still refreshing to revisit.