Twin Peaks as it was, the original two seasons, has its fans and its detractors. It was a show full of striking images and eccentric characters, along with a lot of strange goings on. Whether they were of the murder mystery, soap opera, or supernatural variety. But one thing is clear, it was over. Studio meddling saw to that regardless of whether it seemed to end with a bizarre cliffhanger or not. Nothing is more apparent here in the subsequent movie which refuses to answer any lingering questions by being a prequel. It even opens with a television set being destroyed. David Lynch was done with that whole idea and now it was time for a new nightmare to begin. 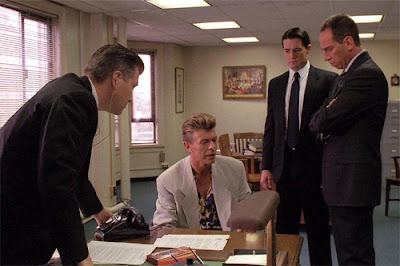 Despite being set before the events of the first season this isn't something newcomers can really watch as a stand-alone movie. It gives away one of the big reveals for one thing. And for another this is all presented with very little context. Characters are given little introduction and their situations are not set up. It might be interesting to have no preconceptions I suppose, but I wouldn't recommend it. Even long time viewers were less than satisfied at the time after all. However on repeat viewings its something that many have learned to appreciate for what it is rather than what is could or should have been. Does it all hold up? Well like anything here your mileage will vary. It's a strange and disjointed experience to say the least.

The opening feels like a short film in itself as Special Agents Chester Desmond (Chris Isaak) and Sam Stanley (Kiefer Sutherland) are called in by their FBI boss Gordon Cole (David Lynch) to investigate a murder. Leaving a bizarre crime scene (apparently involving a school bus full of kids and several prostitutes) Desmond meets Stanley for an equally bizarre briefing (apparently involving a woman in red doing a mime act) before they set out for Deer Meadow, Washington. It's like a lost episode of the show in which kooky local characters are all replaced by rude and abrasive counterparts. Because its not the show. And yet this all feels strangely appropriate as whimsy and brutality collide; it's part dream and part nightmare.

Just to make things feel even more abstract this storyline ends abruptly and we're introduced to series regulars Special Agents Dale Cooper (Kyle MacLachlan) and Albert Rosenfield (Miguel Ferrer). In the Philadelphia field office they meet the second musician in the film; Agent Jeffries (played by David Bowie) who seems to have stumbled out of a strange dimension filled with malevolent spirits. Just in case you forgot about those and thought this FBI stuff was part of a genuine whodunnit. It just raises more questions so at this point you really have to go with the flow. There's a mystery involving puppeteers behind curtains, the loss of innocence, and the consumption of canned goods. But real answers are not on the table. 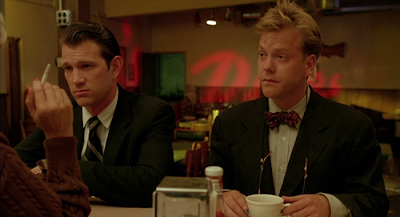 The real story however is, as usual, about a girl in trouble. In this case the focus of the forces of evil and the next murder victim, Laura Palmer (Sheryl Lee) the Homecoming Queen. Her world is a living contradiction as teenage romance clashes with drug abuse and sexual promiscuity, and tender parental love is a facade. The authorities have little chance of solving a case when it seems to stem from an ethereal man in denim (Frank Silva) and his demonic cohorts. And Laura has little chance of a normal life when it's filled with so many disparate extremes. By day she helps deliver food to the elderly and by night she's lured into sinister paintings. When she's not selling herself in local dive bars or being witness to shootings.

This is the real success of the film - much like Blue Velvet and Mulholland Drive - thanks to the way it depicts the contrast between hazy dreams and harsh realities. In a balanced world this sort of duality is inescapable, and Laura seems to be carrying this conflict within her. Sheryl Lee's performance is also a large part of why the story works as she shifts violently between sentimental best friend and callous junkie. Her father Leland is still a disturbing figure as he was in the show, but this time with Ray Wise being given more free reign to shine. If the opening shifted between quirky and dark then the final half of the film is pushed into far bleaker territory as the reasons for Laura's self destructive tendencies are laid bare.

The cruelty of the events which transpire is tough to watch, as it should be, but it works as both a psychological thriller and as an abuse story. The horror lies behind both supernatural veils and picket fences, leaving its true source open for debate. Any deeper meanings are yours to interpret as the film makers would have it, and it's clear that the investigation shown has once again been intentionally cut short. Thanks to the cast and the score it's a harrowing but often emotional experience that packs a punch. The only real issue here is that a lot of extended scenes found in the supplementary feature 'The Missing Pieces' would have improved the pacing. Some scenes are obviously truncated and should really have been used in full, particularly those involving Laura's parents and Phillip Jeffries.

But whether you end up doing your own detective work or not this remains a disturbing and fascinating story. This is now of course one part of an even larger narrative, and many elements have been expanded on in a third season of the show. The new episodes are pretty engrossing, but they also carry on the film's message that Twin Peaks, as it was, is very much over. Its about as different from the film as the film was from the earlier series. Which also kind of reinforces the feeling that this does actually work on its own terms. Its a story that shares some similarities in terms of casting and storylines, but it has its own vibe, and its own visual style. Its a bridge between two worlds but it's also a solo experience that retains a sense of finality and is worth going back to.