In a Hollywood diner a man describes a recurring dream he's been having. Then as things go on the details of this dream start to become a reality. Even when these moments have just been explained they are still somehow incredibly unsettling as the camera follows him outside to a filthy alley and things get really weird. But that sense of unease sums up of a lot of the viewing experience in a story that is full of random vignettes, false starts, detours into imagined scenarios and sudden stops at the end of nightmares. Maybe this is all just the wandering fantasy of a woman who wants to make it big on the silver screen. But just like the troubled man at the table trying to explain this doesn't change things or make them less disturbing.

If you've ever sat day dreaming about a better life or simply let your mind wander during a mundane afternoon you'll know the feeling. The film itself can be dissected to find out which characters mean what and how this is all symbolic of one thing or another. Ego driven actors, vain directors, the allure of stardom and the seedy underbelly of the film industry. But the real success of the story is the way it portrays the mood of a person desperate to change old mistakes that can never be undone. The human brain is a perfect tool for annoying itself with fixations on better times in the past and idealised future events that might never be. It lacks focus and often jumps from one vagary to the next. So while its true that the scattered structure of the movie is a result of all this being planned as a TV show it also feels very appropriate.

Betty (Naomi Watts) arrives has typically optimistic hopes and dreams when she arrives in Los Angeles. She's got an apartment ready thanks to a generous aunt and things are all set, until Betty meets Rita (Laura Harring) who has amnesia after a car accident. Elsewhere a series of similarly strange events are taking place as director Adam (Justin Theroux) is pressured into casting a film the way the studio financiers want it. There's also that sinister diner dream sequence happening parallel to all of this, in what feels like another reality. Meanwhile in an unrelated office building an assassination goes horribly wrong as a hired killer (Mark Pellegrino) leaves a large amount of collateral damage in his wake. Maybe this is all just a normal day in L.A. for some people.

There are some patterns in the chaos as Betty tries to find out what happened to Rita, and Adam finds himself out of work. Later he finds he's also out of his apartment and out of cash thanks to a cheating wife and a criminal element at the movie studio. A perfect melodrama seems to be unfolding in both scenarios whether it makes sense or not, and Betty soon delivers a mesmerising audition and finds out clues to the accident mystery. But there's a growing sense of unease as Betty's fortunes seem too good to be true, while Adam's situation seems to be laughably contrived. The layers of the situation are often pretty opaque to say the least, but at least it's not all totally dry. Like a lot of films from David Lynch there's a nightmarish quality it all but there's also some levity along the way. 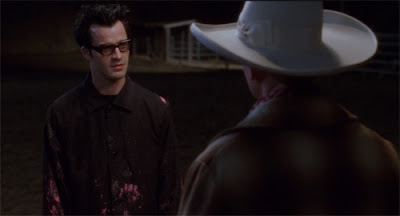 A good example is the scene involving Dan Hedaya and movie composer Angelo Badalamenti as mob duo the 'Castigliane Brothers'. Tensions are high as they threaten Adam's project because he won't agree to cast a lead actress of their choosing. But their caricatured actions involving bizarre repeating dialogue and one of 'the finest espressos in the world' leave a darkly comic shadow on the whole story. Likewise his encounter with a mystery man only known as 'The Cowboy' seems to have dropped in from another dimension, while maintaining a great deal of suspense. The whole thing maintains this warped sensibility as things progress, although the third act is decidedly darker. The dream has to end and the real world is far more bleak.

This dual reality extends to the music and the sound design. Angelo Badalamenti's excellent score provides a truly melancholy atmosphere right from the start, while David Lynch's sound design is both eerie and extreme with both dramatic stings and larger than life punch effects when necessary. It also features the best use of Roy Orbison since Blue Velvet. Is this is all just a story about a failed dancer or is Betty the best at what she does? Naomi Watts delivers a performance that matches this fractured dynamic, and at times exceeds it. She's both charming and disturbing; which mirrors the whole film as it morphs between friendship, loss, love and hate. Your mileage may vary, which goes without saying, but it's worth seeing for her character in all these different states.

What does it all mean? Well that's up to you I'm afraid. It's probably more direct than Lost Highway but still less accessible than some of Lynch's other thrillers. Today I'd have to say it's his strongest work in this vein, though my feelings on it have grown more positive over time. It's a film that's more about the mood than the plot, though this may always frustrate some viewers. It's often absurd but it's often compelling, relatable, and tragic. Is this really a horror film? Well yes and no. It certainly feels like a corny day dream and a waking nightmare in equal measures, and that alone is a pretty impressive feat. But I guess the movie industry itself is often seen to contain these conflicting elements in real life. Perhaps it's all just a strange romance involving a woman in trouble. It's worth repeat viewings just to be sure.