While I've talked about films like The Church (aka Demons 3) and Cemetery Man (aka Demons '95) let's take a look at a few of the other films in the alleged series. Which if I'm honest features an even more confusing pseudo-sequel numbering system than the Yes, Madam franchise. If there is even such a thing. Which of course... there isn't. In this case some of the releases in question are semi-remakes of other films entirely or take large portions of their stories from existing films. In reality it's best to ignore all of this title madness and just let the films speak for themselves. Be warned that this experience may result in a different kind of lunacy. But you'll never be duped into thinking that these are related at all, even if Michele Soavi is credited in them, either behind the camera or on screen. 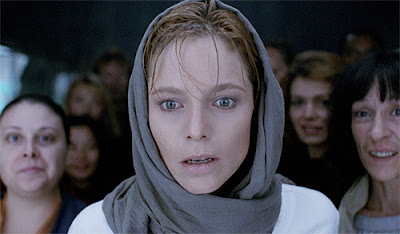 To begin where we left off with The Church, Soavi's 1991 demon worship movie The Sect is more or less another take on the story from Rosemary's Baby. Although they throw in a few H.P. Lovecraft references along the way to keep things from becoming stale. There's also a whole lot of weird material involving ancient insects and tap water full of blue slime. Maybe this is all kind of a spoiler, but when another one of the alternative titles is The Devil's Daughter it makes more sense to know this ahead of time. Or as much sense as the resulting movie can make when there are scenes of rabbits channel surfing and people being attacked by evil handkerchiefs.

The story begins in the 1970s California with a cult leader (Tomas Arana) attacking a group of hippies living by a stream. Later it jumps forward to a scene in modern day Frankfurt where a grisly murder leads police to suspect the same Satanists are active in the city. Not that this all matters since the real plot is about school teacher Miriam (Kelly Curtis) who takes in a strange old man (Herbert Lom) after nearly hitting him with her car. There are a lot of crazy dreams, and a lot of crazy real life sequences as things go on. The mystery man seems ill at times and perfectly lucid in other instances, asking a lot of strange questions before later vanishing in the night.

Of course this leads into yet more disturbing events involving the same cult and its malevolent plans. It's another weird and ethereal movie, in particular scenes below Miriam's house where a strange well is located. People die and come back to life, dreams merge into reality, and the whole thing is bathed in a recurring shade of blue. This meandering narrative is the main problem and the film goes beyond the standard ninety-minute running time. Many scenes outstay their welcome while others are largely extraneous. But it's all pretty hypnotic in the expected Argento/Soavi sense which covers up a lot of the faults. It's oddly engrossing and contains so many odd moments that it's hard not to give it a recommendation. 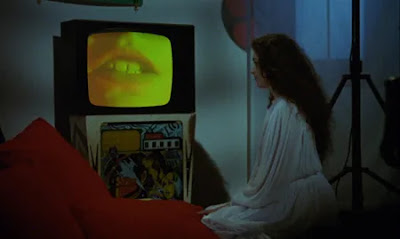 Things really start to go off the rails in Luigi Cozzi's The Black Cat (1989). Despite the title it has nothing to do with the story by Edgar Allen Poe used in Tales of Terror and Two Evil Eyes. And despite it also being named Demons 6 on some home video covers and starring some familiar faces it has nothing to do with the original Demoni. In fact it even tries to connect itself to Suspiria by having one of the central characters be a screenwriter working on a sequel to that film. Confused? You should be. Unfortunately this is a case of behind the scenes development problems in a film that may have once been a direct sequel to Inferno. As a result much of the actual storyline here is a head-scratcher.

What actually transpires is a tale of a jealous witch who rises from beyond to avenge herself on those who would use her name in such a project. Anne (Florence Guérin) is working on what seems to be a typical Italian slasher movie, with a villain that looks like the killer in Blood and Black Lace. Her next project is being written by her husband Marc (Urbano Barberini) but the director's wife Nora (Caroline Munro) clearly has her eye on the role. Their story 'Profundus' involves a witch called Levana and it seems that by invoking her name the powers of darkness have been awoken. As a result Anne soon finds herself being tormented by a series of ghastly visions.

What does Levana really want if the script is offensive to her? It's not entirely clear. In many similar plots using the name of an ancient evil would give it more power. Here she just seems intent on upsetting Anne with nightmares about being puked on. Sometimes her baby is in danger, sometimes a little girl with a crystal ball communicates with her through the television. I suspect many fans of this sort of thing will definitely get a kick out of all this, and the visuals of Levana's grave and her freaky face are pretty striking. But ultimately I found it too messy and the conclusion is rushed. What few concrete narrative beats are present arrive too late in the film to make it all come together. 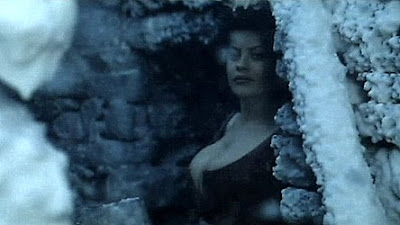 Meanwhile yet another witchcraft story The Devil's Veil (1989) aka The Mask of Satan, or if you like Demons 5... is just a remake of Mario Bava's original Black Sunday. I guess Lamberto Bava just wanted to add some 1980s cheese to his father's masterpiece. Which would be fine if it followed the plot more closely, but instead it's a movie about dumb teenagers on a skiing trip who fall down a crevasse. Conveniently they become trapped after landing right next to the unburied corpse of the evil Anibas. Of course one of them removes the mask she was executed in, so they spend the next hour or so in a frozen church of some kind wandering around in circles. Remaking a classic film for television isn't inherently a bad idea, but it's mostly just dull.

There are some memorable moments along the way with the standout horror sequence involving the witch in a barn. Later effects where she turns into a Gorgon like creature are less interesting but it does all have a certain of icy atmosphere. But so much of the running time is devoted to the teens becoming more and lore unruly as evil influences take them over. There are no actual Demons style transformations, so they spend most of their time tormenting a blind priest. How does this man live so far away from the world and how does he plan to keep the evil buried? Who can say. In some ways it feels like they're all trapped in another place or time outside of reality, but that doesn't help the story become any more compelling.

The lead duo Sabina (Debora Caprioglio) and Davide (Giovanni Guidelli) are somehow free from the possession their friends are under, but that's just so they can play out a series of melodramatic romance scenes. There are some attempts to create a mystery plot and some sense of fated tragedy, although it really just boils down to a 'Nilbog is Goblin spelled backwards' type of revelation. When so many of the scenes are just characters running around the same medieval staircases it's hard to care. With a limited scope the script really needed something more than this, or at least a whole lot of charisma, but half the characters are just dead weight. It's a lesser know release and completionists should take a look, but it's nowhere close to an essential.

To be continued in Part Two...