Reading H.P. Lovecraft's work is a weird experience to say the least, and I'm not just saying that because of all those negative attitudes towards miscegenation. What I mean is that a lot of the time it's all about the unknowable, the unmentionable. And of course the indescribable. Horror on the page in his terms is more of a mood and less a physical presence, a sense of dread which filters through in vague dream-like passages. It induces madness and has to be recoiled from and not studied in detail. So it's strange that the most famous film adaptations of those stories are all very explicit. The lurid colours and extreme violence are what everyone remembers from the likes of From Beyond after all. The intangible is brought to life for the screen with striking detail. 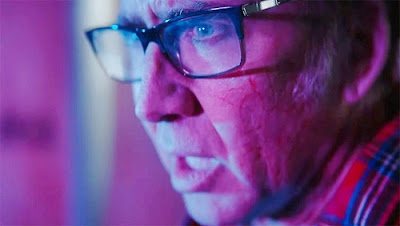 The same can be said here in Richard Stanley's long gestating adaptation. The eponymous colour is no longer an imperceptible, almost invisible energy. It's neon pink. Or purple? Fuchsia if you prefer. It could have been inferred that the original tale was really about x-rays or ultraviolet waves beyond human understanding. It's certainly a horrifying idea in itself; the luminous glow of cosmic radiation seeping into an isolated farmhouse. The idea has been done before of course, with movie meteorites including the short Stephen King chapter in Creepshow. The 1965 attempt Die, Monster, Die! was pretty direct with it's nuclear energy message, despite the rest of the film being a ramshackle attempt to force the story into Roger Corman's usual haunted house format. But this is at last a real effort to bring the all to life with some creative flair.

The stylistic choices throughout lend this a certain sense of celestial wonder, with the whole thing looking a lot like an homage to Stuart Gordon. Subtlety is out and over acting is in. Even the camera work is very flashy at times, with a lot of low focal distances and extreme close ups. To be honest this is kind of distracting, at least during the first act, but maybe the idea was to make this all feel otherworldly. The results are mixed which doesn't help when the opening is so slow. Fortunately it does spend time on characters instead of just a series of beauty shots, but at the same time it could have been trimmed down. Wiccan rituals and online finance deals really aren't compelling, and despite these elements adding some characterisation they really don't feel relevant later on.

The bulk of the storyline involves Nathan Farmer (Nicholas Cage) trying to make rural life work out while his wife Theresa (Joely Richardson) recovers from cancer treatment. On the-nose surnames are kept, although first names have been adjusted and there are other changes because of the modern time period. Pigs and cows are now alpacas... for some reason. But most of this is faithful to the source material as a luminous (but strangely soft) rock falls into their front yard. Soon enough the family starts to behave differently while their crops, farm animals, and even the local wildlife starts to mutate. Other threads involving their son Benny (Brendan Meyer) smoking dope with local hermit Ezra (Tommy Chong) are new while others have been altered so that reservoir surveyor Ward (Elliot Knight) is now an eye witness. But it all slowly comes together as the oddities start to multiply. 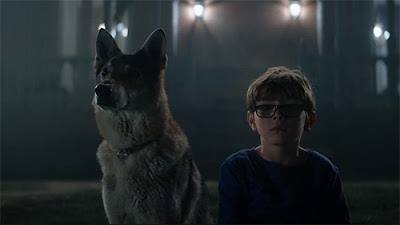 Purely as a vivid horror story things start slowly but are ramped up with excellent pacing when things start to go off the rails. It's hypnotic and alluring in some instances, and grotesque to unexpected extremes during others. Life on the farm is slowly and surely becoming poisoned but it all looks pretty enticing, at least during the daytime. The creeping dread is often so effective because of this sensory shift, it's a hazy and dreamlike experience right up until all of the spilled blood and melting madness takes over. The rocky start may be off-putting to some but it's worth seeing how things unfold. Besides, all the bad cooking and weird news reporter scenes give this all a sense of humanity before everything becomes warped and dessicated.

These aren't the most engaging characters ever written but it's mostly serviceable in a genre full of one note victims. Performances vary and of course this is a Nicholas Cage movie. In terms of where this sits in the table of overwrought personas it's nowhere near the full Bad Lieutenant but it isn't quite Mandy either. Strung out by family problems and apparently channelling his dead father thanks to space rock syndrome, Nathan Gardner is a mixed bag by nature. But he lends the story a certain kind of melancholy as an already trying situation is pushed to its breaking point. Everyone else is fine, but this is more of a visual movie than a dialogue driven one. Less is more in this case and it all works best when the hallucinatory nature of the experience is allowed to reach its natural zenith.

The film as a whole works well when it's at its most cosmic and things certainly hit those notes during the finale. After so many weird visions and sudden shocks things inevitably reach the original story's dour bookend on the heath, and a few of its musings on unknown energy sources. Structurally not everything here is sound and it's got a few shaky moments along the way. A lot of the mystery is left purposely untapped, which occasionally becomes frustrating. But that is also a strong point in a movie which thankfully lacks blunt trauma exposition or monotone science lectures. It feels like a fully fleshed out concept made with creativity, one that stands by itself but also has the tantalising prospect of being the first in a series. It's a throwback with modern a touch and it would be nice to see more. 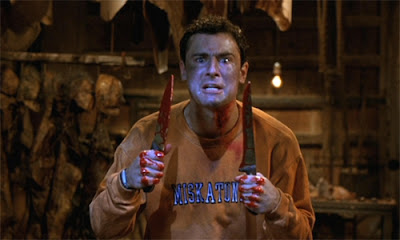 Speaking of throwbacks, here's an early 2000s feature from Stuart Gordon himself that feels like it should really star Jeffrey Combs. Well if you can overlook some pretty dodgy visual effects I suppose. The Shadow over Innsmouth is another Lovecraft tale being adapted of course, though this time they've gone with a snappier title from a related short story. However this one has more drastic changes and replaces the New England tourism trip with a less likely shipwreck in rural Spain. Still, the bulk of the drama is much the same as a traveller Paul (Ezra Godden) finds himself running about a derelict town. The dream scenes are shuffled about and the cross breeding panic is replaced with a touch of incest, but a lot of elements are accurate. They even keep the old soak who tells the hero all of the town's dirty secrets.

Just as a creepy thriller it's solid enough once the stagy opening on a yacht is over and done with, although it does get pretty repetitive as Paul runs about various streets in the dark and escapes a series of increasingly weird buildings. As things go on it's clear that that church of Dagon isn't just a continental oddity, and the locals are descended from more than just land dwelling settlers. The source material had a family called Gilman, and this is even less subtle. Once things really get going it's also pretty brutal with some scenes resembling moments from The Texas Chainsaw Massacre Part II. It's sometimes tense, it's often eerie, but it's also pretty corny. The frog-faced locals shambling around are equal parts sinister and silly, and a lot of the acting is B-movie grade.

But that's okay, from this director I would expect no less. It all builds up to a crazy cult conclusion involving sacrifices and ancient gods, during which the line 'fuck Dagon!' is delivered. You know what you're getting yourself in for here, and it's weird, slimy, and obnoxious. Which really means that it delivers all anyone could ask for. There are even some real practical creature effects after a few upsetting CGI moments, which is great to see. It's a shame that it can't connect fully with The Beyond and Re-Animator because of this being a Spanish production, but in a way it's kind of a spiritual third instalment. But accepting these limitations and its obvious low budget this is still a reasonable adaptation with some fun moments along the way.