With so much popular culture surrounding a film like this it's hard to really break it down in an interesting fashion. There have been multiple remakes, films made in Japan and Britain, and dozens of other thinly veiled copies in all forms of media. But this is still a classic monster movie after all so it's got to be discussed. The most intriguing part of all this is how much of the story is often only half remembered. It's about beauty and the beast right? There's a sentimental element to all this somewhere in the memory of most people. King Kong is a loveable prisoner of circumstance, doomed because of animal infatuation. But it has more in common with the 1930s horror film trend than it first appears. 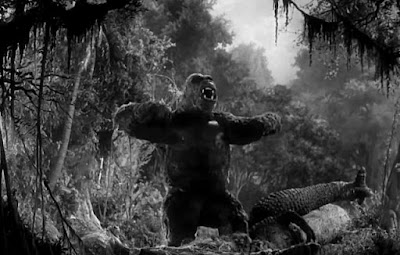 The opening of the film admittedly betrays this idea with a clunky and sometimes saccharine series of events. The melodrama as a hungry Ann Darrow (Fay Wray) finds herself accused of stealing before being aided by opportunistic film maker Carl Denham (Robert Armstrong) is brisk and efficient. The prickly non-romance between Ann and sailor Jack Driscoll (Bruce Cabot) is quickly introduced in a way that makes some of the love stories in an average 1950s monster B-movie look subtle. But in this way it's similar to The Island of Lost Souls one year earlier, an awkward false start before the foggy atmosphere of dread starts to creep in. The stock elements are here to create a comfy start to the voyage that is soon dashed.

The unnamed island they eventually reach is of course where the story reveals its true genre as a mixture of lost world fantasy and monster spectacle. There's a lot of unease as the crew find a native religion that pays tribute to an unknown deity with human sacrifice. The flat visuals of the first act give way to dark shadows and burning torches. The jungle beyond the giant wall and Kong's altar is full of eerie mist and vines that obscure the surroundings and blot out the real world. The scenery looks like a kind of charcoal illustration at times, or even something by Gustave Doré. Caves and ravines are sinister and foreboding. I cannot begin to imagine what later film distributors thought they were doing by colourising all this.

Soon enough the story changes gears and it becomes a mixture of exploration adventure and monster chaos. There's a whole catalogue of dinosaurs younger viewers will be probably be able to name by heart. But after surviving an encounter with a classic Stegosaurus the men start to be killed in increasingly brutal ways. After making off with his latest bride Kong throws many of them straight into a pit, while others are eaten alive by the wildlife. They shriek with piercing high pitched voices while trying in vein to use guns or climb trees to escape. It's quite hard to imagine how a contemporary audience would react to the animated special effects, but the sound design elements must have also been a shock. 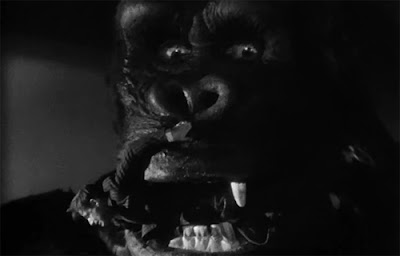 It's simultaneously a feast for the imagination as well as a king of nightmare in which even benign looking creatures are vicious killers. But what of beauty and the beast? It seems like one of those classic cases of a collective pop culture memory generating itself. Ann shows no sign of sympathising with her giant captor at any point in the film. Kong himself has a lot of personality and shows plenty of playful curiosity towards her. But in other sequences he crushes people and chews them up out of pure rage. How he ever stayed chained for so long without any obvious sedation after his island capture is a mystery. The subsequent city scenes get out of hand so quickly as he causes so much mayhem out of either anger or instinctive confusion.

Only The Invisible Man derailed a train so maliciously, and in the same year too. It's not an entirely horrific experience of course, but the similarities to other films of the period are striking. However it is entirely entertaining. There's so much packed into a relatively brief running time. Only the lost spider attack scene (later recreated by animators working with Peter Jackson) would have given this more thrill power. The romantic mood may be in the imagination of the viewers (and later film makers) but the rest of the story is brimming with fantasy, horror and spectacle. Only something like The 7th Voyage of Sinbad would begin to try and match it in terms of creativity -- twenty five years later.

In some ways you can look at this all from any perspective, as a creature feature, as an example of an orchestral score being used for a film, or purely from an animation standpoint. There's a strange timeless quality to many of the set pieces, even if most of the human elements are a product of the era. Maybe it's because dinosaurs and mysterious islands make people feel like big kids even when the film is this old. As a result it's unlikely to be considered a horror film in the usual sense, but the monster movie genre usually ends up coming back around to it. How many cornball stories fall back on the idea of primates versus reptiles or have New York being demolished? It's part of a cycle in its own decade but in some ways the cycle never ended. 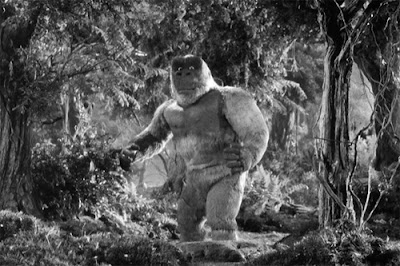 Speaking of cycles, it seems like Kong even started the idea of rushing out a sequel with less time and money to turn a profit. As a result this isn't a quality production. As a story it's not particularly good in general. But it's not dull either and has a lot of weird and interesting moments if nothing else. After being sued by everyone in the city Carl Denham goes back to sea to escape an indictment, and ends up travelling around South East Asia as a cargo trader. Eventually he finds the man who sold him the original island map and is told of buried treasure that could solve all his problems. Great storytelling this is not. However it does have some moments of characterisation that help.

Robert Armstrong does a good job at being a more humble version of the same man this time around, even if trying to help the 'son' of King Kong is a weirdly simplistic result. He even has a cute romance with musician Hilda (Helen Mack). She can't sing and her performing monkey act is incredibly odd, but as a leading lady she's way more compelling than Ann Darrow. Evil sailor Helstrom (John Marston) is a one dimensional villain but adds some fun moments along the way. These are all new ideas even if some of them are barely developed. The ending in particular is incredibly stupid and rushed, while the mid section of the movie replaces any grand spectacle with a few short action scenes in front of the same tiny set.

Kong Junior isn't animated as well as his predecessor, but considering that RKO demanded to have this completed in less than a year it's better than you'd expect. He fights some kind of bear and a couple of rough looking dinosaurs, in between making a lot of weird comedy faces. Or at least that seems to be the idea. Sometimes it's funny but not ha-ha funny. Given more time this could have been something more, and the potential character arcs could have been expanded. But it's undermined by a lethargic first half that spends too much time with eccentric bit parts and a second half that is underwhelming and frugal. Before there's an earthquake and the movie just kind of ends.