At this point it's hard to get excited about a series like this when it's all so heavily cribbed from past ideas. The original King Kong vs. Godzilla got by purely on nonsensical monster battles and a story that existed to parody the world of advertising. Here we're simply reaching the zenith of another extended universe idea that is missing the point. However there is some hope on the horizon with a story that relies on fun instead of doomsday cataclysms, giving the monsters personality again instead of just misplaced religious grandeur. The results never reach the eclectic style of Kong: Skull Island but they never plunge into the migraine inducing destruction of 2019's King of the Monsters. It's somewhere in between so your mileage may vary. 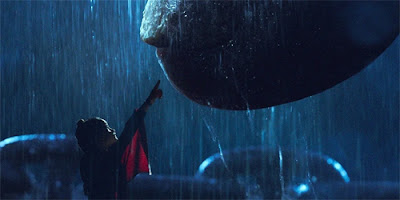 Unfortunately some vestigial elements from the previous film are still present and it's tough to see why. Monster fan Madison (Millie Bobbie Brown) and her father, animal expert Dr. Russell, (Kyle Chandler) stick around despite their story threads being pretty unnecessary at this point. There are too many people stood around staring at giant screens in this and they should have been cut. Madison falls in with monster theorist and undercover lab technician Bernie (Brian Tyree Henry) just so that we can see them travel from different locations and get a first hand look at scenes we would have seen anyway. Her friend Josh (Julian Dennison) is also along for the ride. For some reason. Maybe this is all just to get younger viewers watching but it's mostly superfluous and the awkward comedy is poor.

While the gang goes on a search to find out why Godzilla is causing mayhem at Bernie's place of work, the rest of the cast are working with King Kong in various ways. Anthropologist Dr. Andrews (Rebecca Hall) must begrudgingly find a way to get him a new home under the threat that he will be killed by the Big G in a battle for supremacy. She teams up with Dr. Lind (Alexander Skarsgård) a geology professor who thinks that Kong will have the instinct to find the 'Hollow Earth' referenced in the previous instalments. However behind the scenes he's working not for Monarch but sinister tech corporation Apex, who are financing his work to find Element X at the core of the planet. Of course they don't call it that, but it's definitely that.

Any other recurring Monarch scientists have apparently moved on. Lance Reddick plays the organisation's director but his scene was so brief I forgot he even appeared until the credits rolled. Really the story should have been about Kong and his life with Dr. Andrews. Maybe she should have been the character played by Sally Hawkins. But the real star of the movie should have been Skull Island orphan Jia (Kaylee Hottle). She has no lines and communicates with the giant ape through sign language. Which is why she's the best character in the story. There's so much dumb dialogue in the movie that it's refreshing to see a performance get by just through charm and body language alone. The film works best when it's a Kong story and fortunately there is plenty of Kong.

Kong's scenes in the opening on his home island and the later sequences under the Earth's crust are enjoyable to watch as he figures things out and runs amok. The idea of secret subterranean worlds has always been completely stupid, but it's always fun anyway. Thankfully the action set pieces are all pretty excellent with plenty of creative moments and clear visuals. There are no dust storms or blizzards obscuring scenes and there are no erratic camera movements. Director Adam Wingard's creative style is limited to adding neon lights everywhere, but each sequence is entertaining. Godzilla is an angry villain and Kong has to use his simian brain to outsmart him. The absurd amount of technology used in the film means that it starts to look like Tron Legacy at times, but at least it has a lot of flair.

Much of the film gets by on personality alone whether it's the way it looks or the way the title behemoths grimace at one another. There's a sense of levity to most sequences, particularly when the human bad guys are being squashed. The storyline tries to throw in a twist towards the end of the second act but there are no real surprises here. The score switches from electronic beats and re-tooled Toho themes occasionally, although there should really have been far more of the latter. A licensed soundtrack is also present, which is mostly kind of bad. This sort of inconsistency is the main problem here, but at least the high points are worth waiting for. It's a problem that a mute CGI monster and a mute girl are the most effective protagonists, but it might also bring a smile to your face.

This is a film without any depth for better or worse, and it's mostly dumb in good and bad ways. Real connections between the humans and the creatures would have solved the problem. One of the villains is called Serizawa and it's not clear why the name is dropped. With so many other references to the original Toho series in here this should really have been expanded, instead of being one line. They say Dr. Lind's brother was killed in an earlier underground expedition and then he's never talked about again. Charles Dance should really be in this movie somewhere but apparently that whole thing has blow over. It's a strange beast. But it at least delivers what it promises without any caveats, which is a mammoth sized creature feature. Even if the two stars don't shake hands at the end. 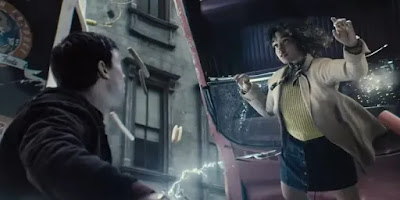 So the Justice League is here... again. Like Clark Kent himself it's been dug out of an early grave and given a new set of threads. Originally this was a film so embarrassingly ramshackle that it should have been left stone dead forever. However thanks to money loving board rooms it's back. And it's... fine? I wouldn't say this was great but it's somehow now not a massive dumpster fire. It's frequently pretty good in fact. Who would have thought that good pacing, characterisation, and proper context were needed in a film. The said film is now four hours long for some reason and it's in the wrong aspect ratio, but at least it functions properly at long last. Don't get me wrong I think it's great when a director's cut delivers the intended results. But no other IMAX sequence released on a home format looks like this.

However it's probably no surprise that this extended running time allows things to breathe. Characters like The Flash and Cyborg suddenly feel like actual heroes. Wonder Woman and her people get more to do. The terrible grey monster that is Steppenwolf suddenly has a personality along with his visual upgrade. Even Batman's butler Alfred has a scene that makes him feel more three-dimensional. It's a scene about making tea and it's great. The real villain's big plan might not make sense and a post credits style teaser is genuinely bad, but the rest of this works as a cohesive whole for the most part. Just watch it in two sittings with a break after the hostage rescue. It's hard to say if this retroactively improves the previous movies in the series but in some ways this finally makes sense of the tone they were going for and runs with it.

That being said it's not perfect. One of the best moments is spoiled by the addition of a CGI character who was clearly never meant to appear. His arrival after the story wraps up is also pretty awkward. And they still never explain why J.K. Simmons got such a ripped physique for his part as Commissioner Gordon. Still it's a vast improvement over the first version. Somehow it's the same but nothing is the same. There's a sense of tension to many scenes that felt rushed or truncated. Not all the plot elements stand up to close inspection but almost all of them are clarified or improved. Especially the story of Cyborg and his father. And at least the cheap looking colour swapped visuals are gone. There is a sense that this is only partly a success of fan demands and partly due to the studio seeing an opportunity. But maybe someone involved will see why this actually works when they go forward with this franchise.